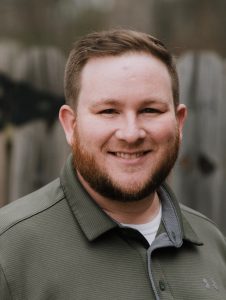 David Potter is the Coordinator of Band Operations at The University of Alabama. His primary duties include all logistic organization and operational units of the University Band program, managing all financial obligations for the Million Dollar Band, University Bands Large Ensembles, Honor Band Festivals and Summer Music Camps. Mr. Potter also coordinates travel arrangements for the University Band Department.

Originally from Huntsville, Alabama, David graduated from Grissom High School, and moved to Tuscaloosa, Alabama, where he studied music performance at The University of Alabama with Charles “Skip” Snead where he earned a degree in horn performance. While at the University of Alabama, he was the principal horn in the Wind Ensemble, performed with a woodwind quintet and a brass quintet and subbed with the Tuscaloosa Symphony Orchestra.

After graduating from the University of Alabama, he moved to Lubbock, Texas, where he completed a masters degree in horn performance at Texas Tech University and studied with Christopher Smith. During this time at Texas Tech, he was a teaching assistant for the horn studio. He also served as 4th horn for the Amarillo Symphony Orchestra and subbed with the Lubbock Symphony Orchestra. During his time in Lubbock, he served as Horn Instructor for Eastern New Mexico University.

Most recently, David was a freelance musician and held a large private lesson studio near Dallas, TX. Notably serving as substitute horn in the Abilene Philharmonic and the San Angelo Symphony.