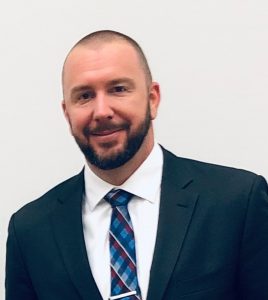 Kevin Welborn is the Associate Director of Athletic Bands and Director of Pep Bands at The University of Alabama.  Mr. Welborn is also the director of the percussion section of the Million Dollar Band, as well as the conductor of the Alabama Concert Band. He holds both a Bachelor and Master degree in music education from The University of Southern Mississippi, where he studied under Dr. Thomas Fraschillo and Dr. John Wooton.

Mr. Welborn served as the Director of Bands for the Clinton Public School District in Clinton, Mississippi from 2015-2019.  The Clinton High School Band is a perennial recipient of the state’s Sweepstakes Award which is awarded to programs that achieve superior ratings in both marching and concert seasons. Most recently, the Clinton Band has been a consecutive Bands of America regional finalist, earning first place in class, as well as first place caption awards at multiple BOA regionals for the 2018 fall season. The program has also earned many WGI color guard and percussion regional finalist appearances, as well as state, circuit, and world championship finalists and medalists.

Before the appointment of Director of Bands, Mr. Welborn was an Assistant Director/Director of Percussion at Clinton from 2009-2015.  During this time the Clinton Percussion would grow to become a nationally recognized percussion program, being awarded numerous state/circuit championships as well as WGI regional championships.  The Clinton Indoor Percussion Ensemble also earned the Silver medal in the 2013 WGI “Scholastic A” Class, the Gold medal in the 2014 WGI “Scholastic Open” Class, and a 10th place finalist in the 2015 WGI “Scholastic World” Class World Championships, all three being held in Dayton, Ohio. Kevin thoroughly enjoyed his time developing and directing the Clinton Percussion program alongside his wife Karen, who served as a designer and choreographer for the program.

Mr. Welborn was an assistant band director at Kempner High School in Sugar Land, Texas from 2006-2007.  He also has served as an adjudicator, given clinics, and taught middle school, high school, and collegiate/university bands throughout the Southeast.