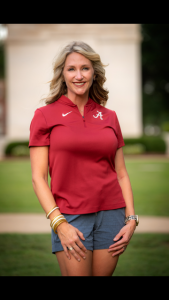 Originally from Hanceville, AL April has approximately 35 years of baton and dance instruction, choreography, teaching, and judging experience. She began taking baton and dance lessons at the age of five and continued throughout her collegiate career at UA. She served four years as a Crimsonette in the Million Dollar Band from 1997-2000. She has been trained by world-renowned coaches and instructors from around the country. She has competed in the areas of baton and dance at the local, state, regional and national levels. She was awarded Miss Majorette of Alabama and Miss Majorette of the South several times during her competing career and competed yearly at America’s Youth on Parade held at Notre Dame University, where she won multiple national titles in both individual and group baton, as well as, individual dance titles.

In December of 2001, she graduated from UA with a degree in Public Relations and later earned a Master’s degree in Elementary Education from The University of West Alabama. In addition to serving as Crimsonette coach, April teaches first grade at Big Sandy Elementary School in the Tuscaloosa County School System.

April and her husband Shane, a former UA baseball player, have been married 19 years and have two boys, Jackson (14) and Brooks (12).