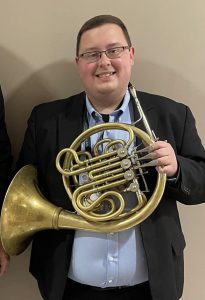 In addition to his passion for solo performance, Matthew is an active chamber musician. He is the principal horn of the Capstone Horn Quartet, also known as “Tater and the Tots.” Since the group’s inception in 2017, the Capstone Horn Quartet has been awarded first-prize in both the Southeast Horn Workshop Quartet Competition and the International Horn Society Summer Symposium Amateur Quartet Competition.

As a Graduate Teaching Assistant with the University of Alabama Band Department, Matt assists in daily operations for the band program, supervising the 400 students of the Million Dollar Band during performances and trips, and assisting with the planning and execution of the Crimson Cavalcade of Bands, Alabama Honor Bands, and Summer Crimson Music Camps. 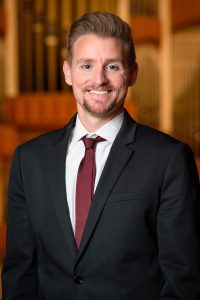 Christopher Lawhorne grew up in the Atlanta (GA) metropolitan area and has been a dedicated musician virtually all his life. His interest in musical composition led him to develop a strong skill set both as a percussionist and pianist, and his first work was performed while he still was a student in high school. He thrives on innovation and design and uses those elements to bring his compositions and performing ensembles success. Mr. Lawhorne attended Reinhardt University where he developed and crafted his compositional skills while receiving his Bachelor of Music Education and Instrumental Conducting. During his degree work Mr. Lawhorne studied with Dr. David Gregory, Dr. George Lucktenberg, and Richard Bell. His student teaching experience gave him the opportunity to work extensively with high school students where the results of his teaching and rehearsing brought the Intermediate Band their very first superior rating at Georgia Music Educators Association’s Large Group Performance Evaluation. While at Reinhardt University, several of Mr. Lawhorne’s works were performed under the baton of Dr. David Gregory, and he was given the opportunity to conduct one of his orchestral compositions in concert. Mr. Lawhorne had several percussion ensemble pieces performed at Reinhardt’s annual High School Honor Band Clinics. The guest conductor of one of these honor bands was Dr. Lowell Graham who offered Chris the opportunity to serve as a Teaching Assistant while pursuing his Master’s Degree at the University of
Texas in El Paso.

His degree work in Musical Composition gave Mr. Lawhorne the opportunity of additional course work in Instrumental Conducting. In addition to his conducting studies, Mr. Lawhorne was tasked with directing the UTEP Concert Band. He opened ensemble membership to local High School students and as a result, the combined personnel completed a cycle of four very successful performances – an accomplishment never before achieved at UTEP. After the completion of his course of study, Mr. Lawhorne was granted, with Honors, a Degree in Instrumental Conducting with emphasis in Musical
Composition. Upon completion of his Master’s, he accepted the position of Associate Director of Bands of Chapin High School in El Paso, Texas and spent six years with the program before beginning his Doctor of Musical Arts degree in Wind Conducting under of instruction of Dr. Kenneth Ozzello, which he is currently working on.

During his tenure at Chapin he helped bring the Chapin Band program significant success. For the first time in seven years the Chapin Marching Band competed in finals at a national level contest, and the second Jazz Band was awarded third place at one of the largest jazz contests in the region. Mr. Lawhorne’s direction of the Symphonic Band, comprised mostly of Freshmen, earned superior ratings for the first time in the Chapin Band history. Additionally, many of his students participated annually at the state Solo and Ensemble contest where most earned Superior ratings. Chris also founded and served as Executive Director of Sun City Independent, the only Winter Guard International Independent Percussion Ensemble within 300 miles of El Paso. Mr. Lawhorne guest conducted Reinhardt University at the Georgia Music Educators Association state convention and has conducted at numerous regional band clinics. He hopes soon to see the publication of his compositions as he wishes to share his talents with ensembles around the nation. Spence Howell completed his Bachelor’s Degree in Music Education from Western Carolina University in Cullowhee, NC, graduating Magna Cum Laude in the spring of 2018. In his time as an undergrad at WCU, Spence studied trumpet under Dr. P. Bradley Ulrich and served as principal trumpet in the Wind Ensemble, the Artist in Residence Orchestra in association with the Asheville Symphony, and the Balsam Mountain Brass Quintet. As a charter member of the Balsam Mountain Brass Quintet, Spence toured South Africa in the summer of 2017, where he performed and taught alongside the internationally known Smoky Mountain Brass Quintet. Spence also performed in several other ensembles as well as the Pride of the Mountains Marching Band. In his four years as a member in the Pride of the Mountains, Spence served under director David Starnes as a trumpet section leader for three years, part-time choreographer, and as a featured performer and soloist.

Spence has four years of experience performing as a mellophone and trumpet player with Carolina Crown, a world class drum and bugle corps. Inferno, Relentless, It Is, and Beast are all productions he has been a part of during his tenure with the corps. As a member of Carolina Crown, Spence has received several Jim Ott Memorial awards for brass achievement, a John Brazale award for best visual performance, and a Donald Angelica award for best general effect. Studying under incredible educators such as brass caption head Matt Harloff, music arranger Michael Klesch, and visual caption head Ron Hardin, has had a major impact on Spence as a performer and educator.

As a Graduate Teaching Assistant with the University of Alabama Band Department, Spence assists in daily operations for the band program, supervising the 400 students of the Million Dollar Band during performances and trips, and assisting with the planning and execution of the Crimson Cavalcade of Bands, Alabama Honor Bands, and Summer Crimson Music Camps. Shortly after graduating in Louisiana​, she traded in her swamp boots for work with a mouse down in Florida. Her work with Walt Disney’s Performing Arts led her to start an international travel journey teaching in Disney English schools in Mainland China. During this time Caroline was voted one of the top ten most sought-after teachers in China ​and tied for first in overall parent satisfaction. As a flutist, she has appeared at the Kennedy Center, St. Stephen’s Cathedral in Vienna, St. Vitus Church in Prague, Shangrila Hotel in Chengdu, and St. Stephen’s Basilica in Budapest, in addition to many venues throughout the United States. She has traveled to 35 countries and along her way has studied with flute players Wang Liguo, Shanna Drescher, Diane Schultz, Suzanne Burklee and Heather Yarmel.

After returning to the U.S, her love of travel turned her in a different direction. Aside from music, Caroline is passionate about youth activism. This has led her to work with Thirst Project and Legacy Youth Leadership which includes work as a public speaker at Yale, Princeton, Penn State, Harvard, and Model UN conferences throughout the United States. Before moving to Tuscaloosa Caroline taught in Elementary music, middle/high school band in states such as Louisiana, Arkansas, Florida and Georgia.

Caroline has recently joined the University of Alabama ​Department of Bands as a Graduate Teaching Assistant. She is working on her M.M. in Music Education with former AMEA president, Dr. Carl Hancock.